New in this release

In this release, in which we focused on Developer Productivity and First Experience, these are the main new features:

Tools for the Developer in Servoy Developer:

The Form Editor in Servoy 6 has gotten a major overhaul. The main new features are a configurable Palette, Alignment Guides for placing, moving & resizing elements and many keyboard shortcuts for new and existing functions. Also the Form editing toolbars have been inlined into the editor, instead of being part of the main toolbar area. 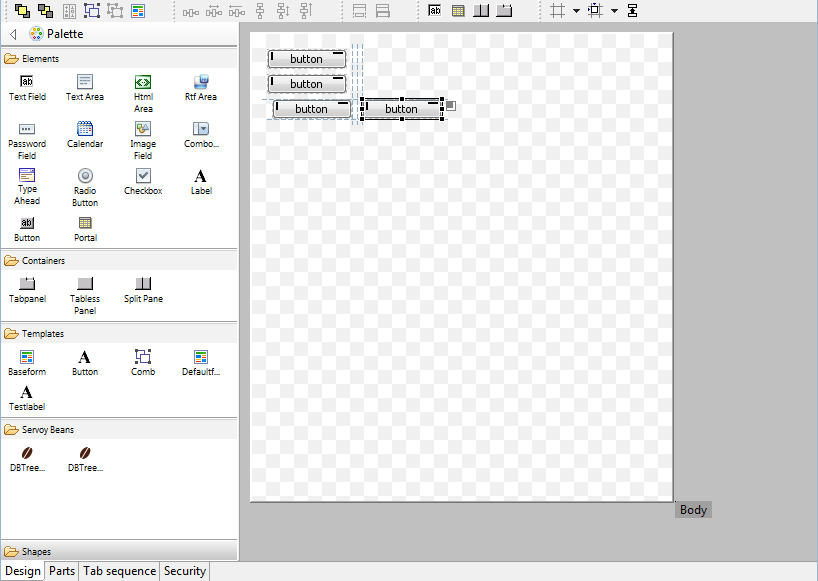 The Form Editor in Servoy 6 provides a sophisticated mechanism for aligning newly placed, moved or resized elements. The snapping to grid and the display of the grid have been disabled by default in favor of the new alignment guide functionality.

The new alignment snapping guides are like the grid snapping guides, but the snapping is not based on a fixed grid, but on proximity to existing elements of the Form and/or the Form edges.

It is also possible to create custom snapping guides by right-clicking one of the rulers (The rulers must be showing). These custom guides are temporary and only for the Form Editor on which they were created. A custom guide can be removed by selecting it in the Ruler and pressing Delete.

Also added is a click-able Anchoring feedback area on selected element. Clicking the feedback icon pops up a menu with options to quickly set the anchoring options 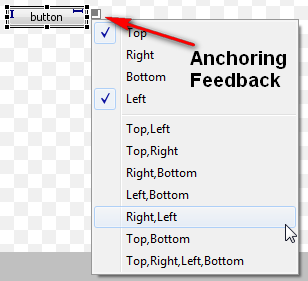 The feedback are on the selected element provides visual feedback on how the element is anchored. Examples:
Top & Left:

New functionality has been added to make multiple elements have the same width and/or height. When two or more elements are selected, the Same Width and Same height functionality gets enabled:

When invoked, all elements get the same height and/or width as the element that was selected first.

The following keyboard shortcuts have been added:

The result of the effort is that:

In order for all this to work, the builder process needs to be able to infer typing information from the JavaScript source. With JavaScript being a weak-typed and dynamic language, this information can't always be automatically inferred from the source-code itself.

An example of such a code structure is a JSDataSet. A JSDataSet created based on a query, cannot be automatically analysed @designtime to see which columns it will contain, thus references to the columns will generate builder markers. The same goes for dynamically inside code creating XML/XMLList objects or JavaScript Objects.

Other scenario's are functions that return a generic type like JSRecord or JSFoundset, while the context in which they are called gives then additional properties (in the case of these examples all their dataproviders).

The typing information that cannot be inferred from the source-code itself can be supplied using JSDoc. This can be done for in JSDoc comments above the declaration of functions and variables. In order to supply all the relevant information the JSDoc support within Servoy Developer has been extended as well.

The majority of the scenario's where code cannot be fully analysed fall into the following categories:

While most scenario's can be solved by providing the right information through JSDoc, some code construct cannot be resolved through JSDoc. In this case dynamic property access can be used to suppress the builder process to generate builder markers:

In order to take full advantage of the new refactoring features in Servoy 6, it is vital to resolve the markers by providing the required information through JSDoc. However, through the preferences, the warnings can also be ignored (they are just warnings, which not necessarily indicate errors in code!), but the usefulness of the refactoring functionality will diminish as code refactors will not be complete.

A new CSS StyleSheet editor has been incorporated into Servoy Developer, with the following features:

Servoy 6 supports a new Command Console view. The command console view is like the Interactive Console view, but with the following differences:

In Servoy 6 it is possible to interact with Servoy Developer from both Debug Clients and the new Command Console. The available methods are:

The .save(...) methods save the changes to the workspace and does the same as editing a Form in a Form Editor in Servoy Developer and saving the changes.

Needles to say, this functionality is available only inside Servoy Developer.

The rowBGColorCalculation property of forms is deprecated and instead of this it's now possible to provide odd/even/selected row styling information through StyleSheets:

Starting from Servoy 6 there is a new onRender event added to Forms, Portals and Elements. The aim of this event is to allow changing display properties of supporting components just before they are shown or updated. As such it can be used for conditional formatting for example and it complements the static styling options (setting properties on elements of through StyleSheets, semi conditional Styling (Row styling, see previous item) and the runtime API of all elements.

On Form and Portals the event is fired not only for the Form/Portal itself, but also for all the standard Servoy Elements on the Form/Portal, if the element does not have its own onRender event handler. The Form/Portal level onRedner event will not fire for beans.

The onRender event handler is called with a parameter of type JSRenderEvent, that provides the following functions:

Example use: Making negative values in a column red and zero values orange

About performance: The onRender event will be fired often. It's therefor advised to keep the logic inside the onRender event handler method as optimized as possible, for quick execution. It's advised to refrain from calling any code outside the API of the JSRenderEvent or the Renderable class.

The Inheritance model of Servoy has been enhanced to allow:

Due to the extension of the Inheritance model a behavior change was introduced. When asking for elements and/or parts of forms that extend other forms, the inherited elements/parts are also returned in Servoy 6, whereas prior to Servoy 6, only the non-inherited elements would be returned and the (hierargy of) super forms(s) had to be inspected