Form inheritance is used to extend a form's functions and UI with those of another form (the super form).
This will give the original form all the methods/variables/elements/properties/parts of the form that it extends.

The inheritance is not limited to 1 level, for example there is a form a, form b and form c, form b is extended with a and c with b. The result is that form c will then have all the methods/variables/elements/properties/parts of form a, b and c.

Form 'code_base': Here are all the functions like 'new record', 'delete record' ect. On this form there are no parts, it is strictly code. This form will have no datasource.
Form 'data_controller': Here are buttons for the actions 'new record' and 'delete record' ect. There could be more than one, so there can be multiple designs. This form will inherit the 'code_base' form and uses all it's functions. This form will have no datasource.
Form 'customers': This will inherit the 'data_controller' because the functions and buttons are already inherited only the datasource and fields have to be added and there is a working form. 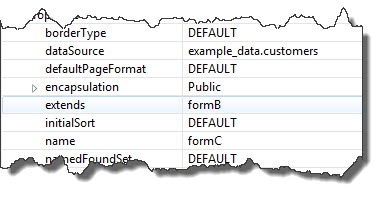 To do this in runtime, it can be done using the same property with the solutionModel.

All the elements on the form are accessible in the solutionModel also the elements that are inherited from a other form they can be accessed as if they are on the sub form.

A sub form will inherit all the methods of the super form. These methods can be overwritten. When this happens, Servoy will generate a method with a call to it's super in it. 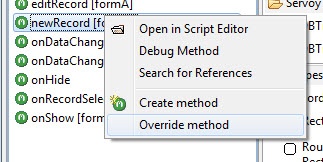 In the generated method there will be '_super.newRecord(event)' this will call the original method on the super form. This can be removed if the super code doesn't need to be called or code can be inserted before of after the call, if it is inserted after the super call don't forget to move the 'return'.

Sample of code before:

Sample of code after:

There are not many limitations to form inheritance. One of the limitations is that if there is an element on the super form, it can not be deleted on the sub form, if it should not show on the sub form the visible property of the element can be unchecked. Another limitation is that there cannot be new parts added in-between existing ones, new parts can only be added below existing parts. 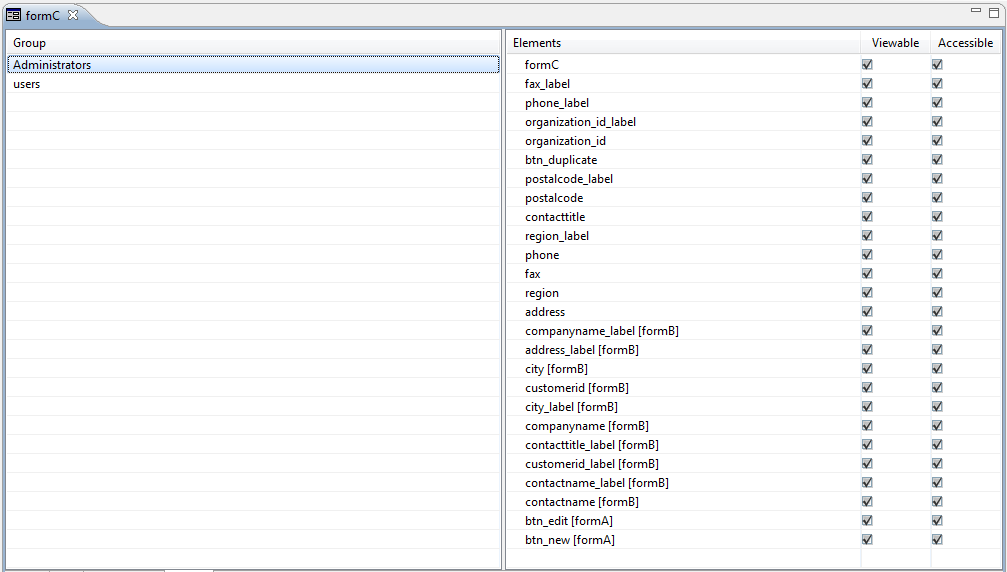