JavaScript was originally developed by Brendan Eichof Netscape under the name Mocha, which was later renamed to LiveScript and finally to JavaScript. JavaScript code, much like other programming languages, is made up of statements which serve to make assignments, compare values and execute other sections of code.

JavaScript is case sensitive, meaning that capital letters are distinct from their lowercase counterparts.

For example, the following identifiers refer to separate, distinct values:

Case sensitivity applies to all aspects of the JavaScript language:

All JavaScript keywords are lowercase. For example, when you use a feature like an if statement, make sure that you type if and not If or IF.

JavaScript uses the camel casing (mixed casing) naming convention for functions, methods and properties. If a name is one word, then the name is made of all lowercase characters. If more words are used to form a name, the first word is lowercase followed by the next word(s) which all start with a capital letter.

No spaces and punctuations are using with forming these names.

JavaScript applies these rules to the use of the whitespace in coding.

JavaScript ignores those characters that take up space on the screen without visual representation or without necessary meaning.

However, most operations other than simple arithmetic functions require a space to make their meaning clear.

do not have the same meaning. The first statement invokes the typeof operator on a variable x and places the result in s. The second statement copies the value of a variable called typeofx into s.

Whitespaces within a string, between single or double quotes, are preserved. For example:

A semicolon indicates the end of a JavaScript statement. You can use a semicolon for:

Multiple Statements on One Line

You do not need to use a semicolon for the last statement of a method (script).

JavaScript uses curly braces {} to group a list of statements together into one larger statement, known as a block statement.

Here an example of statements that make up the body of a function:

Here is an example of more than one statement to be executed:

Here is an if else example to show standard identing in JavaScript code:

Here is an explanation, step-by-step of the identing example:

An important aspect of good JavaScript code (and actually all code) is commenting. Commenting means:

Single line comments begin with a double forward slash //. The interpreter will ignore everything from that point until the end of the line.

It's not possible to nest comments and will result in an error.

Keywords are part of the set of JavaScript reserved words.

the keyword new enables you to create your own object and is used for an object's constructor.

The keyword var is used to declare variables.

Here are the main elements of JavaScript grammar:

Variables are used to stored data. Each variable has a name, called its identifier. Variables are declared in JavaScript using the var keyword. This keyword allocates storage space for new data and indicates that a new identifier is in use.

When you declare a variable you can do that with or without assigning a value to it.

This example shows how to declare a variable without assigning a value to it:

This example shows how to assign a value when declaring a variable:

You can also declare multiple variables by using one var statement:

These are primitive or basic data types, which contain one kind of data, for variables:

A string is a list of characters. A string literal is indicated by enclosing characters in single quotes ' or double quotes ".

Any alphabetic, numeric or punctuation characters can be placed in a string.

However, there are some exceptions known as escape codes. An escape code (also called escape sequence) is a small amount of characters preceded by a backslash that has a special meaning to the JavaScript interpreter. Escape codes allow you to enter special representative characters witout typing them directly into your code.

Let's say that you want to declare two lines of text in a variable:

The way this is done will result in a syntax error, because JavaScript interprets the second line as a separate statment. The correct way to do this is by using an escape character:

Boolean data types take on one of two possible values: true or false. A boolean literal is indicated by using these values directly in the code:

An undefined data type is used for variables and object properties that do not exist or have not been assigned a value. The only value an undefined type can have is undefined:

The NULL value indicates an empty or non-existent value, but the data type is defined. The only value a NULL data type can have is NULL:

When undefined and NULL data types are being compared, the result will be true.

Composite data types are made up of strings, numbers, booleans, undefined values, null values and even other composite types. These are the three composite types:

An object can hold any type of data and is the primary mechanism by wich tasks are carried out. Data contained in an object are properties for the object. Properties are accessed with the dot operator . followed by the property name:

The array data type is an ordered set of values grouped together under a single identifier. The easiest way to create an array is to define it as a standard variable and then group the set of values in brackets:

To create an array with no length:

To create an array with a predetermined length, but no specific data:

The elements of an array are accessed by providing an index value within brackets. In the following example variable x equals Bob and variable y equals true:

Functions are used to keep code that performs a particular job in one place, making the code reusable. In Servoy, built-in functions are accessible from the method editor.

One of the major differences between JavaScript and other programming languages is that JavaScript is weakly typed. This means that the type of variable is inferred from the variable's content. As a result, the data type can change the moment you put data into the variable of another type than it previously contained.

Here are the common arithmetic operators:

This example shows how a is set to the value of b before b is incremented by 1.

This example shows how a is set to the value of b after b is incremented by 1.

This example shows how a is set to the value of b before b is decremented by 1.

This example shows how a is set to the value of b after b is decremented by 1.

Here are some logical operators:

Here are some comparison operators:

Here is a tertiary statement:

This example shows if p is greater than or is equal to 25 then x = yes and otherwise x = no.

Expressions are the building blocks of many JavaScript statements. Any combination of variables, operators and statements which evaluate some result, like a sentence or a phrase. Literals and variables are the simplest kind of expressions and can be used to create more complex expressions.

Statements are the essence of JavaScript. They are a set of instructions to carry our specific actions. JavaScript statements may take the form of conditionals, loop or object manipulations.

One of the most common statements is an assignment. This is a statement that uses the = operator and places the value on the right-hand side into the variable on the left. Here is an example of an assignment:

The assignment operator = should not be confused with the "is equal to" comparison operator == which is used in conditional expressions.

Objects are a critical concept and feature of JavaScript. An object is a collection that can be primitive or composite data, inclusing functions and other objects.

Objects are created using constructors. These are mthods that create a fresh instance of an object for you to use. Objects can be created by using the new keyword, the name of the object and open and closed parentheses. The parentheses tell the interpreter that you want to invoke the constructor method for the given object.

This example shows the creation of a new string object:

Servoy can reference a large number of built-in JavaScript objects.

The members of an object are called properties. Properties are accessed by placing a period . immediately following the name of the object.

For example, length is a property of the object string:

A JavaScript function is quite similar to a procedure or subroutine in other programming languages. A function is a discrete set of statements which perfom some actions. It may accept incoming values (parameters) and it may return an outgoing value.

a function is called from a JavaScript statement to perform its duty.

A method is simply a function which is contained in an object and is a member function of the object. Methods of objects are accessed the same way as properties, with trailing parentheses immediately following the name of the method. If the method takes arguments (parameters), the arguments are included in the parentheses.

In Servoy, both methods and functions are accessible from the Servoy Solution Explorer.

The DOM is primarily defined by the last two kinds of objects; browser objects and document objects.

In the past, different browsers have included or modified slightly different features for manipulating document objects. However, these objects now have been standardized by the World Wide Web Consortium (W3C) Document Object Model.

The Document Object Model (DOM) is a standardized Application Programming Interface (API) with a platform-independent language, whose intent is to:

The Solutions Object Model (SOM) provides a JavaScript-based onject model for Servoy solutions, defined in large part by the first two kinds of JavaScript objects explained above (user-defined objects and buiilt-in objects). Similar to the DOM, the SOM core defines a tree-like representation of Servoy, also known as the SOM tree. All elements are related to each other in hierarchical way.

The DOM is limited to being defined by and acting on browsers and browser documents.

Here an overview of the Servoy SOM: 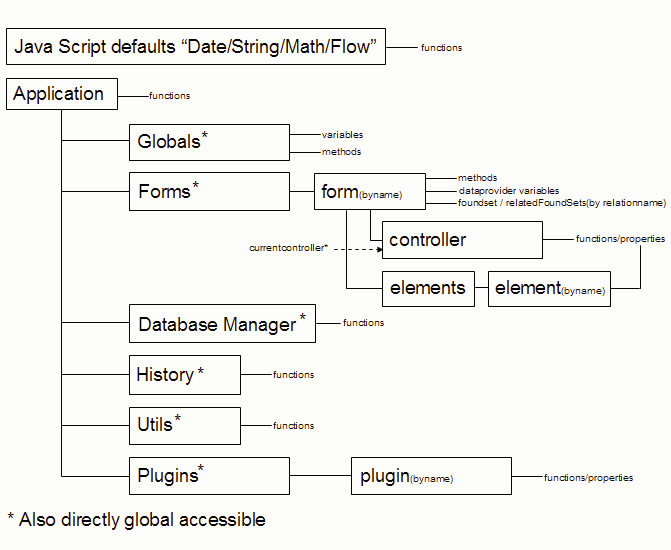 Here is a list of the JavaScript object references and how they apply to Servoy:

An object is a collection that can hold any type of data, including functions and other objects and is the primary mechanism for carrying our useful tasks.

Objects are created using constructors. These are methods that create a fresh instance of an object.

Data contained in an object are said to be properties of the object. Properties are accessed with a dot . operator (a period) followed by the property name.

Functions are a special type of JavaScript object that contains executable code. A function is called (invoked) by following the function name with parentheses (). The parenthesis can contain parameters (arguments) which are pieces of data that are passed to the function when it is invoked.

Functions that are part (a member) of objects are know as methods.

The forms collection contains objects that reference all forms in a solution.

If the form you are referencing is the currently active form, the syntax is:

If the form you are referencing is not the currently active form, the syntax is:

The elements collection contains objects contained in the form. You can access elments such as fields, buttons, labels, images, portals, tabpanels and JavaBeans.

If the form you are referencing is the currently active form, the syntax is:

If the form you are referencing is notthe currently active form, the syntax is:
Syntax: