Client plugins are Java classes contained in jar files stored under /{servoyInstall}/application_server/plugins/ folder, and by which new features can be added to Servoy Developer.

Plugins can be developed in any Java development environment, like Eclipse for example.

Example This is an example of a Java project called WhoisPlugin, and the Servoy libraries added to it.

Create a New Package under the Java Project

A package is a neat way in Java to organize libraries coming from arbitrary sources and make them work together without problems of 'Name collision'.

The developer can name the package whatever they want, but, by convention, the package hierarchy should reflect the domain name (if there is any) in reverse (from domain to sub-domains). This will avoid name collision with any other libraries, and will spare the developer from having to type the 'fully qualified name' in their code; Eclipse will automatically do that.

This is an example of naming a package: com.servoy.plugins.whois  - where 'com.servoy' is a prefix which follows the rule listed above, and 'whois' is the plugin name.

In order to implement a client plugin, create a class that implements one or more of the three interfaces: IServerPlugin, ISmartClientPlugin, and IClientPlugin.

Before starting coding, do study these interfaces on api docs.

This example shows the implementation of a component which will query a whois server and retrieve whois information about a domain.

The method getStriptObject inherited by IClientPlugin from IScriptableProvider interface, returns the object that will provide the plugin with scripting properties and methods. So, by convention, it is called a Provider.

A provider implements interfaces IScriptable and IReturnedTypesProvider. Do study them on api docs.

Create a class which implements the two interfaces. This class will provide methods representing the plugin behavior.

For a proper understanding of how to use JavaDoc and how to build the documentation of a plugin, see Documenting the Plugin Api.

This example shows the implementation of the WhoisPluginProvider - the scriptable object which provides the behavior for the 'whois' plugin.

The plugin will expose an overloaded query method, as well as three other properties: port, server, and timeout.

The main query method contains JavaDoc which provides a description of the function and a sample. The other overloaded methods will display the same description and sample, having them copied via @clonedesc and @sampleas annotations from the main method.

Since the class which implements the IServerPlugin, ISmartClientPlugin or IClientPlugin is one file among many inside the jar, it's advised indicate which file is the plugin entry point.

The plugin jar can use Java Service Provider to expose Servoy Plugin classes. There should be a file inside the plugin jar at the path: META-INF/services/com.servoy.j2db.plugins.IPlugin which contains a line for each class in the jar that  implements IPlugin). The plugin should also have a default constructor (with no parameters). If file com.servoy.j2db.plugins.IPlugin is missing or contains invalid entries Servoy will automatically scan the jar for all classes that implement interface IPlugin. An example of file content (for whois plugin) is:

When opening the Servoy Developer, it should be visible under Plugins node in Solution Explorer.

Example #1 This example shows how the 'whois' plugin is displayed in the Solution Explorer. Notice the overloaded function query and the three properties.

The solution has a simple test form with two fields based on two form variables domainName and result, and a button Query whois whose action will call the query function. 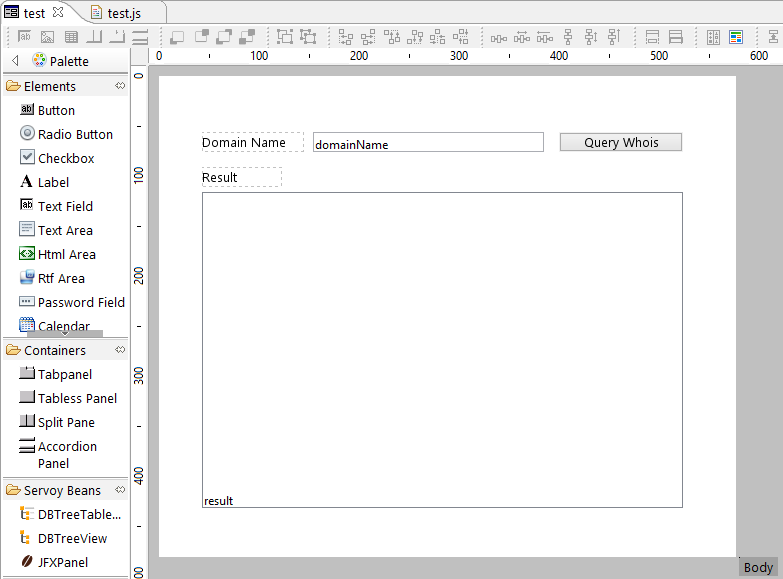 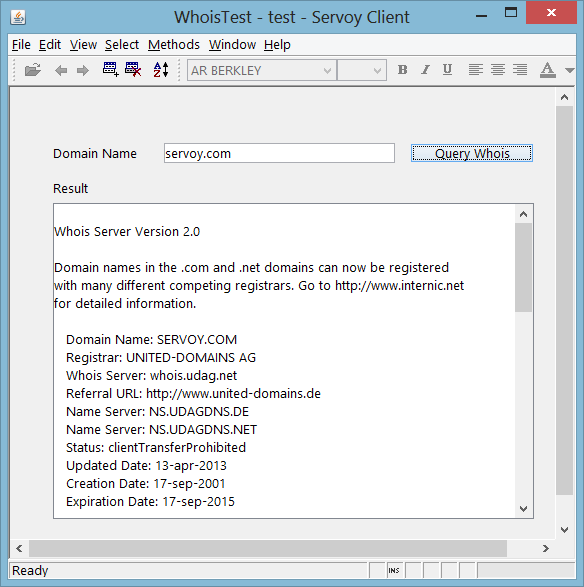